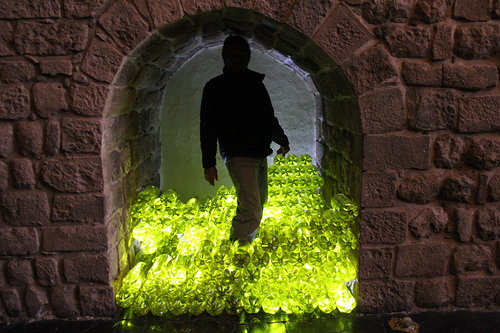 I am an artist based in Los Angeles, California and my favorite early curitorial projects have included “Art Burn,” an art immolation, in Miami, timed to the city’s art fairs (2009); “Art Shred” a companion piece held in NYC, in which works by over two-dozen artists were destroyed (2010); and “Post No Bills,” a pop-up gallery at a Queens, N.Y. construction site, a piece that was covered in the New York Times (2008).

My intervention, “La Luz” (“The Light”), from 2012, consisted of a series of architectural installations inside the Qorikancha and the Museum of Santo Domingo, the former Inca temple in Cusco, Peru. In pre-Columbian times, the temple was sheathed in gold plates and its chambers filled with masterpieces of Inca metal work, pieces that were destroyed by the Spanish conquistadors.

My installation paid tribute to the past glories of this important site via the installation of hundreds of bottles of Peruvian soda (more than 600kg worth). The most popular local soft drinks in Peru are a brilliant yellow color and I used these, in combination with ambient light, to recreate the golden light that shone inside the temple. On the last day of the exhibition, the public was invited to take sections of the work home with them so that no traces of it would remain.

My work has been shown in galleries in the U.S. and some of my pieces have received coverage in outlets such as Time.com, ArtNews, The New York Times, the Miami Herald and the Art Newspaper.

Time describes the artist as "creative," "realistic," and "underestimated." The Art Newspaper described his 2009 show, “Art Burn,” an International contemporary art expo & immolation, as a “bonfire of the art vanities” and the Miami Herald declared it “a funky Basel sideshow.” The New York Times described his previous exhibition, “Post No Bills,” a street art gallery installation in Long Island City as “audacious.” The Brooklyn Rail describes El Celso as “a street artist with a taste for experimentation, a knack for making things happen and a predilection for drawing colorful naked women.” His figurative drawings, paintings and original works on Plexiglas were also the subject of a documentary series, “The Streets of New York,” which was broadcast on NHK in Japan in 2008. His work is also featured in numerous publications, street art books and media web sites.

E-MAIL ME: celso [at] elcelso.com